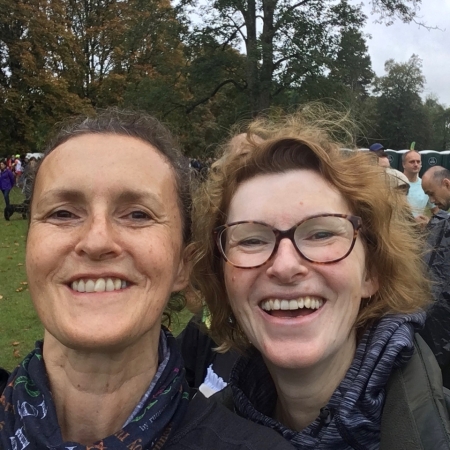 It was the eighth Ealing Half Marathon this morning. I’ve paced two, missed one through injury, volunteered at four, and ran today’s. It’s a really emotional race for me because it keeps pace with me getting into running, going through treatment and finding my new normal. It was started in 2012 by Kelvin Walker who coached me for the Brighton marathon that year. I paced 2:15 for the first two years and loved helping people achieve their goal. 2014 was my year of PBs when I got one at every distance but unfortunately twisted my ankle just before Ealing Half. I opted out of the race but got my marathon PB at Chester a week later. In 2015, I was three weeks on from my last chemo treatment, feeling weak and apprehensive about surgery but absolutely loved volunteering at mile 12, and cheering people on to the finish. This is what I write at the time: ‘If there was some way of measuring the well-being in a community then it would have rocketed today, from people achieving pbs or doing their first half-marathon, from family and friends supporting and cheering people on, from volunteers making it all run smoothly, from children doing the mini mile and getting the running bug, from people giving and receiving, supporting and encouraging.’

The following two years I led the volunteer teams in Montpelier but got frustrated by locals whingeing about the roads being closed, even though it was only for a couple of hours, with plenty of warning, so vowed never to do that again. Kudos to those who still do, who encourage the amazing volunteers, who pacify the stroppy car drivers, and who redirect the lost Tesco delivery men. Last year I had the best volunteering role ever, being the passenger in the lead car that did the recce of the route before the race started making sure everything was in place. My role was to radio back to race central if there were any problems, but there weren’t.

And this year I ran the race. I was aiming for under 2 hours but set off a bit too fast and couldn’t keep up the pace. I finished in 2:03.17, a few seconds faster than Hackney Half back in May, but I had the best time and was happy to let go of my target and just run the race. My sister Mandy came over to support me. She’d planned to run it but has been injured and I was so grateful that she came to cheer me on. What a great day.

One thought on “Ealing Half Marathon”