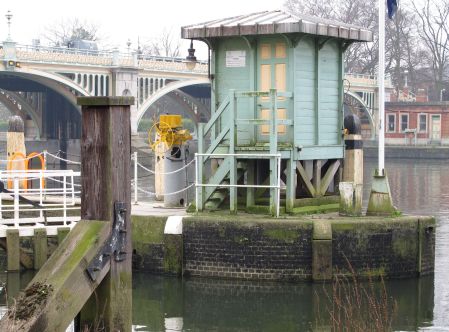 I set off at 7:30 this morning to do the Sunday club run in reverse – through Walpole Park, Lammas Park, Blondin Park, Boston Manor Park, along the canal to Brentford, through Syon Park, along the river to Richmond Weir and back to Kew Bridge, then Gunnersbury Park and home. Lots of it is off-road, the sun was shining, there were rabbits and squirrels and plenty of other runners to say good morning to – pretty idyllic really.

And then towards Kew Bridge I could see a man in the distance, crouching by the path and pointing his hand towards me as if it was a gun. As I got nearer, he slunk across the path in front of me to crouch on the opposite side, keeping his finger trained on me as I ran past. My initial reaction was one of fear – what was he doing? Was he going to come after me? I couldn’t see anyone else in front of me and when I looked back, he had disappeared but that meant I didn’t know where he was. I was genuinely relieved to see some other runners and a cyclist approaching and kept glancing back to check I wasn’t being followed.

And then I just got really angry that he had encroached on my space and my running and had made me feel unsafe doing something that I love. Women grow up with the threat of attack and rape by strangers, and that fear restricts our movement, stopping us going out late or on our own. But I think we need to get the risk in perspective. Crime figures show that it’s men who are most likely to be on the receiving end of a violent attack by a stranger and most rapes are perpetrated by someone known to those attacked. I don’t want to be naïve or unwise, but nor do I want to collude with that climate of fear and let it dictate how I move around when actually the risk is pretty small.

In fifteen years of running regularly I’ve only had two encounters like these that have made me feel uneasy. The other happened a couple of months ago when I called in at Sainsburys at the end of a Saturday morning run to get a paper and something for breakfast. As I walked back across the common, a guy who was completely high walked alongside me chatting and telling me how fit my legs were. There were people around but I was going back to an empty house and as we got closer to the end of my road I had to tell him very strongly to stop following me. He eventually complied and he was so off his head I doubt he’d have any memory of it later, but I did feel wary the next few times I went out running ‘just in case’ he was around. But two unsettling encounters in probably over two thousand runs in 15 years, neither of which harmed me at all, is a fairly insignificant threat.

Of course, I’ve completely demonised the guy by the river. Perhaps he was just mucking around. Perhaps if I’d pretended to shoot him back he would have rolled over and played dead. And that’s another thing I hate about this feeling that it’s unsafe for women to go out on our own; it makes us fearful of men and they become the enemy. The vast majority of the men I know would never hurt a woman physically or emotionally, or another man. People who hurt others are a small minority, and I don’t want to treat half the human race as ‘other’ and dangerous by allowing myself to become fearful of men.

So, to quote the Spencer Davis Group, I’ll keep on running, although, sadly, on my next few runs along the river I’ll be extra alert just in case. I’d love to hear how other people negotiate all this.

One thought on “This is my space”