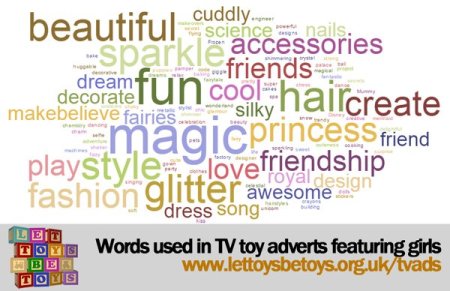 Let Toys be Toys is a brilliant campaign that calls on the toy and publishing industries to top using gendered labels on toys and books for girls and boys. There is no need to have a pink ‘Girls’ Colouring Book’ and a blue ‘Boy’s Colouring Book’; just have colouring books with different images in them and let children choose which they prefer, instead of directing their choices to tired stereotypes. The campaign has just released a report on the gender stereotypes that are alive and well in adverts for toys. The word cloud above shows the words used in TV adverts featuring girls, and below is the one for TV adverts featuring boys: 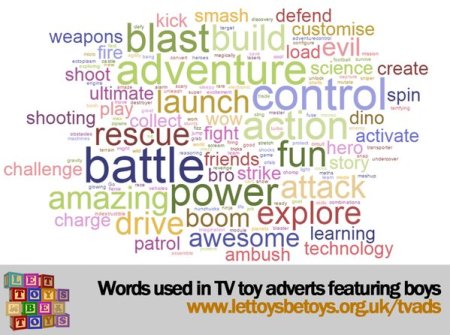 Predictably, adverts featuring boys are ‘predominantly for vehicles, action figure dolls, construction sets and toy weapons. Boys are shown as active and aggressive, and the language used emphasises control, power
and conflict’ while adverts featuring girls are ‘predominantly for dolls, glamour and grooming and have an overwhelming emphasis on appearance, performance, nurturing and relationships. Girls are largely shown as relatively passive and rarely active other than dancing.’ You can download and read the whole report here.

Examples like this not only demonstrate how attributes, opportunities and experiences get divided up between boys and girls but also show why it’s problematic. I’ve used the sets of magnetic words below for a number of years now while teaching on gender, which are very similar to the word clouds above. 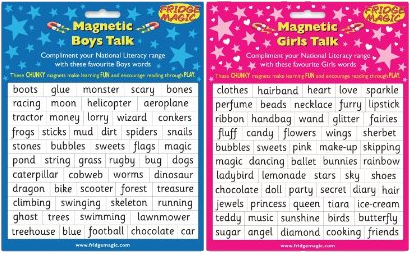 I’ve given people one of these sets of words, without colours attached. I’ve then asked people to write a story with as many of the words in their set as possible, giving them only a short amount of time to do it. Invariably people who are given the ‘blue’ set write about adventurous boys while people who are given the ‘pink’ set write about passive girls doing princessy things. The problem is that if you are only given a limited set of words, you can only write a limited story. If a girl is continually presented with only a small set of activities and attributes that are deemed appropriate for her, she will only have small aspirations for her life. If a boy is constantly offered a limited set of experiences and opportunities to choose from, then he will not explore the fullness of life that could be open to him.

Of course, TV adverts are just one influence on children among many, but they are a pretty strong influence or toy manufacturers wouldn’t invest so much money in them. And the trouble is that children get these gendered messages from lots of different places which makes them harder to ignore or subvert, particularly when many children want to fit in with their friends rather than stand out as different. I think campaigns like Let Toys be Toys are so important, and they have lots of resources on their site for people who want to enable children to be free from harmful stereotypes.