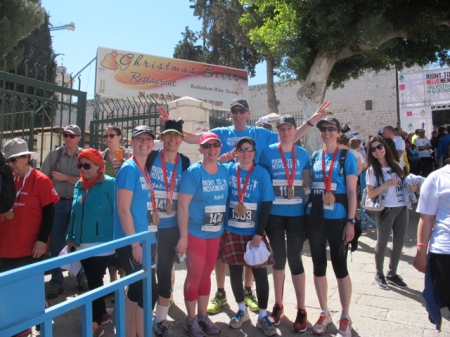 Standing in the queue for the loo before watching the London Marathon last week, some friends and I were comparing running a marathon with childbirth. Straight after the first time you swear you will never do it again, but a few weeks or months later the memory of the pain has faded and you’re planning the next one. In a similar vein, I find myself looking wistfully back at last summer, hankering after all the free time I had to write and think and mooch about; memories of the chemo side-effects have clearly faded, although of course the last thing I want to do is go through that again. A friend who has had treatment for cancer said to me a few weeks ago, ‘your next task is to get cancer from here’ – pointing to her forehead – ‘to here’ – pointing to the back of her head. I find it is shifting, from being the paradigm that frames all my thinking to being something that happened to me last year, and I even have moments when I forget about it altogether. While I’m enjoying having my energy back, and my hair, and my fingernails, I don’t want to lose some of the things I gained last summer, like writing. So, nearly a month on, here are some thoughts on this year’s Palestine marathon.

It’s the fifth year I’ve visited Palestine in the spring, and the fourth year I’ve done the race. There’s something about Palestine that captures your heart – the warmth of the people, the injustice of the situation, the beauty of the land, the normality of a running race and the disproportionate amount of joy it generates. I’ll admit to feeling rather disheartened at the beginning of the trip because it feels like the situation is only getting worse; the settlements get inexorably bigger, land confiscations increase as border stones are moved and the wall encroaches, daily life continues to be disrupted and worn down. But Palestinians don’t have the luxury of despair; they have to get on with life.

There were so many highlights to our time there. We visited Al Rowwad in Aida refugee camp, a centre for creativity and non-violence that practices ‘beautiful resistance’. We met young people who will be coming over to the UK in August with Amos Trust, to perform at the Edinburgh and Greenbelt festivals and other places in between, to experience something of what life is like for their peers here who have never experienced teargas or walls or restrictions on their movement. They danced their hearts out for us, and patiently taught us some Dabke steps without laughing at us.

In Jerusalem, we met Fayrouz from Grassroots Jerusalem, a movement by Palestinians to build Palestinian civil society. She was passionate and angry, so tired of talking about human rights and international law, of taking part in dialogue when the participants are so unequal, of expecting foreign governments to put pressure on Israel and bring change, of peace-building initiatives that create activity and generate funds for INGOs but not Palestinian organisations. That anger and passion drive her to build something positive, to get local groups articulating their vision for Jerusalem, to imagine and co-create a different way of living that prepares for a time when there will be peace. I think some people in our group wanted to persuade her that dialogue is always worthwhile, that international law is crucial, but I loved how she has found her calling and agency, her distinctive contribution to bringing change in this complex situation. Isn’t that what all of us need to discover, in whatever mess we find ourselves, the unique contribution we can make to bring about change, and the energy and passion to get on and do it?

In Manger Square, the morning of the race, I met Philippa Whitford, a Scottish MP, who is a breast cancer surgeon and was over to visit Al Ahli hospital in Gaza. British MPs haven’t been allowed into Gaza since 2009, but as she was travelling as a doctor on her own she slipped under the radar and got in. As she said, ‘if they Google me, I’m stuffed’. She operated on women in the West Bank and Gaza while she was there – more here.

And then there was the race itself. Only in Palestine do you have a shepherd herding his sheep along the side of the route while runners flash past in the opposite direction. Only in Palestine do you have police cars blocking the route and runners dodging round elderly women crossing the road just before the finish. And perhaps only in Palestine would you get such a diverse group as ours entering a race together. There were 16 of us, aged from 17 to 70. Jack, Rachel, Fiona, Katie, Gemma, Ana, Susan and Denise were all doing their first half marathon. Kari was on her second and got a PB. Mike did his 50th marathon just before his 69th birthday. Brian was the oldest runner in the race at 70, and the slowest, finishing in 6 hours 30, after having to persuade the police to let him finish. But then he proposed to his partner Lia on the finishing line, and produced a ring that he’d had in his pocket all the way. I finished the half in two hours and 25 seconds – I couldn’t quite summon up the energy to duck under two hours even though I knew I was close. Hopefully I’ll be back up to marathon distance by next year.

The discussion of anti-semitism in the Labour party has been frustrating this week, with outrageous things being said, and huge amounts of time spent analysing people’s motives and connections. Anti-semitism is abhorrent and should be called out, but it is not anti-semitic to critique Israeli government policy. A just peace for Palestine must mean peace for Israel too.

3 thoughts on “Palestine half”