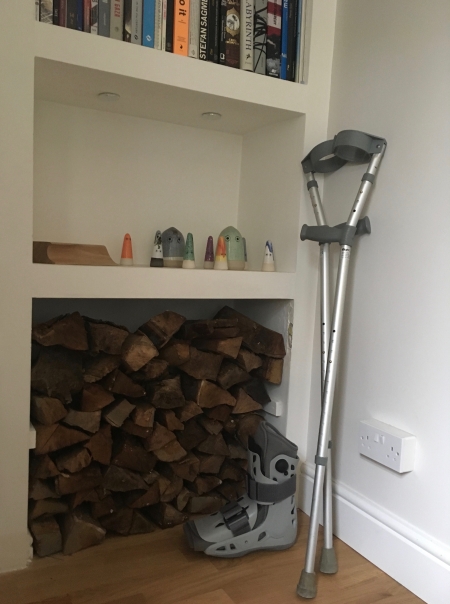 You would think after last year, when I said I was ready for London and patently wasn’t, that I would have learned to keep my race hopes to myself rather than being quite so public about them. Turns out I am not ready for Palestine, after all. I have a stress fracture in my right tibia, and now I have a boot and crutches to play with. I won’t be going to Palestine at all now, because much as I would have loved to watch the race from a table outside a cafe, drinking mint lemonade and cheering people on, I was the trip leader and would have needed to do huge amounts of walking over the five days we would be there. I am a complete novice at using crutches and I’m wobbling about at snail’s pace. I need to get into work tomorrow, and have been exploring bus and tube routes in my head, trying to work out which will minimise the number of steps I need to take. It’s a salutary reminder of what many people have to cope with every day, negotiating a transport system with limited mobility.

My training this time hasn’t been higher mileage or any more intense than previous years, so it seems strange that it should break me. Apparently, cancer treatment can affect your bones so I need to have a bone mineral density scan to see what is happening out of sight within my skeleton. I am trying not to catastrophise and to wait for a verdict from someone who knows what they are talking about. It’s frustrating to have to cancel running plans but I’ve been here before.

After I wrote about being high maintenance, Nigel responded with some wise words about adapting to being an older runner: ‘an interesting ‘coping mechanism’ is to embrace variety. …sometimes in the great journey of life I think it pays to bag the medal and the memory and move on.’ So I’m calling time on my Palestine marathon attempts. I’m still captivated by the people and the place, and hope to go back another time, but not to run 26.2 miles. Time to move on.