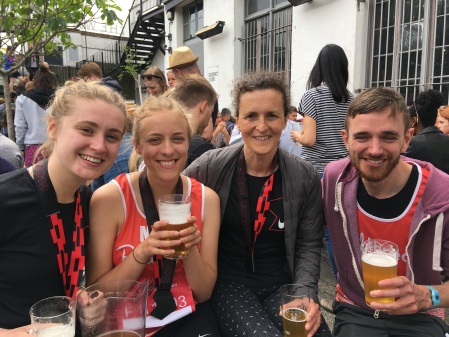 Thanks to my nerdy habit of logging the races I do in a spreadsheet, I can tell you that Hackney Half today was my 20th half marathon, and my sixth slowest. Two of my slower races were pacing Ealing Half to 2:15, and two were Leith Hill Half which is extremely hilly, so you can see how unspectacular my time was. It’s the furthest I’ve run since my stress fracture last year and I’d been hoping to get under 2 hours, but finished in 2:03.33. Having found out my bones are somewhat fragile, I’ve been sensible about building up the distance I’ve been running but my conclusion is 20 miles a week is just not enough to get a good half marathon time, or not enough for me anyway. I ran for the charity I work for, Redthread – here we are with our post-race beer.

I loved the race. There was fantastic support along the route, so much so that in mile nine, I got all emotional at people shouting out my name and discovered that running and crying really don’t mix. I got chatting to a woman called India in the queue for the loo before the start. It was her first ever half, and I said a speedy good luck as we raced for different cubicles. After the race I went into the changing tent, and sat down only to find out that she was next to me – quite remarkable in a race of over 20,000 runners and a nice moment of serendipity.

The one bonus of being ill or injured is that you can kind of reset your PB – so this is now my post stress-fracture PB. I’ve got three more half marathons booked this year – Midnight Sun in Tromso in June, Ealing Half in September and Havering Half in October. Let’s see how they go.

Meanwhile, next week I’m joining the Amos Roadclub cycling in the Peak District and I’ve also got a place in Ride London in August so I want to get out on my bike more too.

One thought on “Hackney Half”