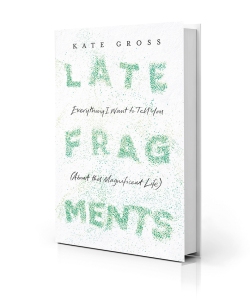 There are some stories about cancer that are utterly tragic and justify the fear and dread that swirl around the word. I think Kate Gross’s story is one of those. She was a high-flyer who worked for two prime ministers in her 20s. Aged 30, she was CEO of the African Governance Initiative, working with fragile democracies across the continent. She was married with twin boys. Then when she was 34, she was diagnosed with bowel cancer after it had spread to her liver. She died two years later on Christmas Eve last year, just before her boys came down to open their stockings.

Kate wrote a blog while she had cancer, and then wrote a book, Late Fragments, for The Knights, as she called her boys, so that they would understand more about who she was when they grew up. It is a beautifully written book about life and how to live it well. She finds a sense of clarity and wholeness among the pain and loss in the months leading up to her death. And one of the things that contributes to that is rediscovering the joy of writing, something she had loved as a child, but that had got squeezed out in the busyness of her life. She writes:

‘I wonder whether this unexpected sense of completeness stems from something else, something which applies as much to you lucky sods who have decades ahead of you. I’m not doing what I was before, but I am not doing nothing. I am writing. The clickety-clack of my fingers on the keyboard is like the sound of rain on parched fields. Why did I ever stop doing this? If words are who I am, how did I let this become such a marginal part of my life? You know the answer because I have described my neglected hinterland. It happens: work is, for most of us, what we do with our outer selves, the grown-up tip of the iceberg that we show the world, which takes up our time and energy. But in all that aching and striving and achieving it is so easy to lose sight of the things which truly define us. These things try to break through, insistently, because they matter.’

I can so identify with her words. I earned my living from writing for 12 years, wrote a an award-winning charity blog for five years, have written lots of youth work resources and one proper book, and yet you can see from this blog how intermittent that writing had become. I had little to write about and no time to write it. Cancer has given me back that desire to write to try and make sense of what is happening to me. I write in my previously neglected journal every day, sometimes two or three times, and you get the edited highlights here. I write in my journal the things that I can’t even say to anyone else, the darkest thoughts, and then I look back the next day and realise that I’ve moved on, that things are not that bad, but that somehow putting them into words and writing them down released their power over me.

And writing here has stripped away the sense of isolation that I felt when I first heard my diagnosis. Early on I wrote in my journal, ‘Cancer turns you into an exhibit. You slip into a parallel world where things are not what they were and people observe you with pity to see how you are coping.’ I still feel sometimes like I am in a completely different space, but I know that so many people have entered that space with me rather than watching from a distance. We all struggle with what to say when people we love face something like this and I am so grateful for every comment here and on social media in response to what I write, and all the emails, texts and phone calls. Everyone has to deal with cancer in the way that suits them and not everyone chooses to do it in public. But this suits me and has led to the most amazing conversations and connections with people.

Cancer has disrupted my plans, my sense of identity, my knowledge of what I am physically capable of, my place in the world but it has also given me back the desire and the time to write and for that I am hugely grateful. It has shown me that people love me more than I ever knew. I have found going back into the second round of treatment really hard, but I know I am not alone and that means the world to me.