We stopped half way in Sudbury just after midnight for pre-ordered porridge, although if there’s a next time I think I’ll take my chances on the food stalls set up along the route, which are less crowded. There was fantastic support along the way, from families sitting in their gardens, a woman in a dressing gown cheering us on from her front door, and kids shouting ‘Oggy! Oggy! Oggy!’ as we went past. Jacs, Ali and Graham arrived at the beach just after 5am on their superior cycling legs, catching the sunrise. Adrian and I got there an hour later. We had a quick paddle in the sea before joining the queues to get the bikes on the van for the journey back to London.

Chapeau to Southwark Cyclists who are guardians of this ride, keeping it organised enough to enable people to take part while making it very clear that everyone does it at their own risk. Its a logistical nightmare to transport 1000 people and their bikes back to London and reunite them but somehow they manage it. 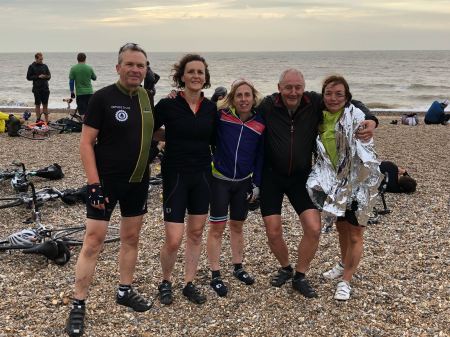